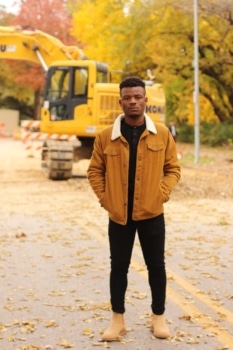 Born in the Congo, Meshack grew up chasing elephants with his six siblings. He then moved to South Africa near the Cape Town area as a young child. He lived there until a few months ago.

One of his older brothers was an electrical engineer and would take Meshack out on job sites. This exposed him to a lot of electrical applications which sparked his interest in electrical work as a career. That’s why he then went on obtain a degree at the University of Cape Town specializing in Electrical studies.

In 2016, three of Meshack’s older siblings came to the United States. After a couple of years, they relayed to the family that the United States was truly a wonderful place to live and work. They saw many opportunities and invited the rest of the family (mom, dad and four younger siblings including Meshack) to join them.

Meshack has greatly enjoyed his time in the United States. He was drawn to Kenton Brothers’ Apprentice program. He knew this would advance his knowledge and skill set. He hopes to someday take all that he is learning from opportunities here in Kansas City back to South Africa.

I’ve enjoyed getting to know and understand about Meshack’s culture. He is teaching me Swahili… one of the four languages he is fluent in. He is always appreciative and he’s got a genuine spirit that makes him a positive role model to all of us at Kenton Brothers.

We’re excited to see what the future brings for him and so happy to have him as a part of our Kenton Brothers team!