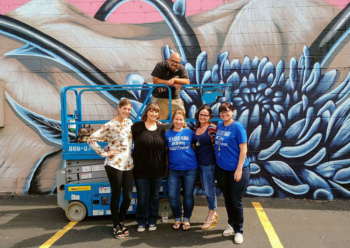 The week of September 8-15, the SpraySeeMo Mural Festival extended their reach to the East side along Truman Road for their 2019 festivities!

Kenton Brothers had wanted to be a part of the mural festival when we were located in the Crossroads Arts District, but we were in the process of moving to the East side of downtown later that year. This year, we were able to donate a wall at our new building. And we couldn’t be happier with the artist, Ivan Roque. His mural shares a compelling environmental message. #savethepolarbears! 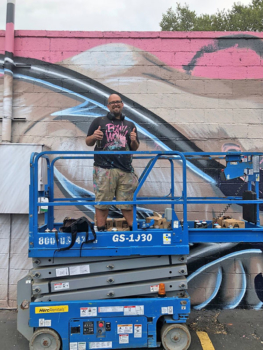 SpraySeeMO‘s goal is to “continue to grow and propel Kansas City into a mural laden town that promotes creative expression and exploration; an art mecca of our own Midwest design.”

Ivan told us about his design, “The idea behind the piece is impending extinction of the great polar bear… a creature so magnificent and powerful that one can only be in awe in its presence. Here, I’ve decided to create a thinned out polar bear due to the lack of prey. The Chrysanthemum is considered the flower of death used mainly for funerary occasions and the vines are a symbol of its nearing time. I dedicate this mural to my good friend @loveismofficial who’s opened my eyes even more to this ongoing tragedy and have a better understanding of the responsibilities that we carry painting in the public realm.”

Ivan was born in Miami in December of 1991. Raised in the inner city of the infamous Carol City with a passion for the concepts of birth, death, renewal and social struggles. His influences range from the old masters to the new such Caravaggio, Marc Rothko, Typoe and Gianni Versace. 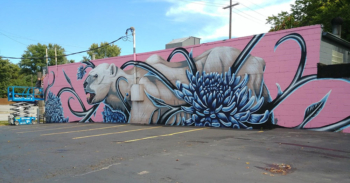 He has traveled quite extensively for various exhibitions and murals including shows in New York City, Dubai, Seoul and mural festivals such as the Bushwick Collective Block Party… and the SpraySeeMo Mural Festival in Kansas City.

We were thankful to learn that Ivan is a man of his word even down to the environmental-based spray paint he used–@kobrapaint-that doesn’t use propellants with VOC’s that hurt the ozone layer (or Polar Bears).

Ivan, thank you and please know that we’re proud to display your art in KC! #kbway

For more info, check out this article and video on the Kansas City Star’s website.

Medical Marijuana in Missouri: What to consider when purchasing IP Video Su...
Scroll to top