This is the number one question asked when we demo our security cameras. Typically, we’re showing cameras to a client or prospective client because investing in video cameras is often a visual decision. Usually, we’re set up outdoors and looking at a parking lot shot. An example is this image of our parking lot. Our parking lot is relatively small, so sometimes we’re able to capture a license plate as we’ll see a bit later. 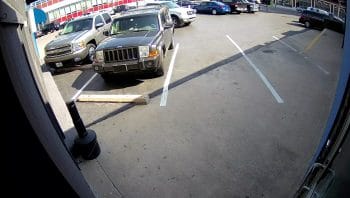 In the security industry, we’ve settled on a measure that reflects the pixel quality of the image. It’s called pixels per foot or PPF.

PPF is a calculation of the horizontal pixels of the image divided by the horizontal distance that is being covered by the camera at a given distance from the camera. That might seem a bit technical, but the nice thing is that it’s a measure our industry agrees on so that we’re all talking the same language!

Typically if we’re using a camera to capture license plates, we would start by reducing the field of view to only one or 2 lanes of traffic, not a wide angle like in the shot of our parking lot shown above.

You can see from this next shot that we were able to capture a license plate, even though the camera has a wide angle. This is mostly because the plate is so close to the camera and the truck is moving slowly. The PPF here is about 99 PPF. 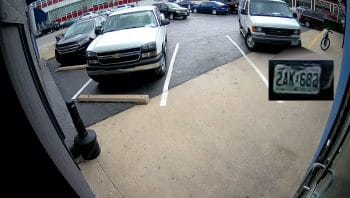 The angle of the plate to the camera

In order to capture a good license plate image, we want the plate to be as square to the lens as in the image above. As the vehicle angles away from the camera we’ll have a harder time capturing the license plate.

As we can see in the image below, The PPF is only slightly less than before, but we weren’t able to capture the license plate. 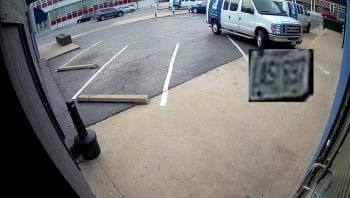 The camera, much like our own eye, has to adjust to lighting changes. Because cars are typically moving, the camera has a hard time adjusting to the lighting conditions in enough time to see a license plate. In the night shot example below, the plate is almost square to the camera, but we’re farther away, and the brake license plate lights are washing out the plate. (Generally, the lower resolution cameras also have better light response and wider dynamic range. These would increase the ability to capture license plates but are counter to the resolution needs we identified earlier.) 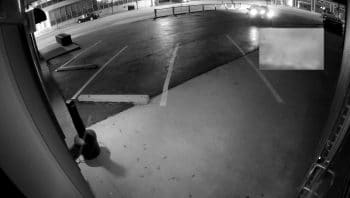 There are several models of cameras that capture license plates using different methods including infrared, flash lighting and high frame rates. However, these application specific cameras will not provide an overview of the parking lot at the same time.

So, “Can I get a license plate with that?”

The answer is maybe… If you want a camera that shows other details like the color of the car and an overview of your parking lot, then there are steps you can take to increase the ability of license plate capture by balancing the resolution angle and lighting. If you want a camera that only captures license plates, then an application specific camera is the way to go!

Need help with your specific application? Give us a call!

Kenton Brothers at ISC West – The largest security conference in the United...
Scroll to top