Today, I want to show you some new products from Axis Communications.

The first is an Axis Q6125-LE. It’s a new PTZ (Point-Tilt-Zoom) that has built-in IR. This is a first for Axis. IP Cameras have had IR illuminators for a while, but the challenge with a PTZ is using enough IR illumination to reach the target when it’s far away and not blasting the target with IR illumination when it’s very close.  You can see in this video how the man’s face is overexposed when he gets close to the camera. (Note that this is an example of overexposure, not how the Axis camera performs.)

Axis overcomes this challenge, by using multiple IR illuminators inside the Q6125-LE. Each IR illuminator is faded in or out based on the zoom level of the lens. This feature is in addition to the other standard features in Axis Q series PTZ cameras like auto tracking and speed dome technology and Axis is including analytics like Fence Guard and Loitering guard.

We’ll see some of those technologies in upcoming blogs. This PTZ camera fits nicely into Axis’s line up.

The next product we’re excited about is Axis’s new D2050-VE. This is a totally new technology for Axis. 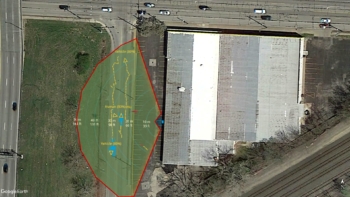 It’s a radar paired with a PTZ. The radar can detect people and vehicles in a 120-degree arc for a little over 160 feet. It can still be connected to your video management software, but the image shows all the things that the radar is tracking, instead of an image of the tracked item. The radar does not need light and can “see” through fog and other conditions that would normally prevent camera footage.

With a PTZ the radar becomes even more useful. It will tell the PTZ the location of the object or objects, so the PTZ can keep them in view. Although many Axis PTZs have auto-tracking, they will not see other items that appear when auto-tracking is engaged. The radar always has a 120-degree field of view and will tell the PTZ about the other objects in the area.

Axis is rapidly expanding on the firmware of the D2050-VE, recently they have added an accuracy rating, which tells you how sure the object is a car or person, and speed filters to alert when a car is moving too fast. The application for the Axis D2050-VE is in private areas where advanced detection is required. Coupling the radar with a PTZ adds identification to the detection that the radar already gives.

We’re excited about the possibilities that the Axis Q6125-LE and D2050-VE bring to our customers!