The Allen County Sheriff’s Office intercom system is part of the critical infrastructure that allows communication throughout the detention center. It serves as a tool for safety and security for officers and detainees equally. The existing system was operational, but aging. As part of the critical infrastructure, we needed to make sure it stays operational as well as make it possible to add future capabilities.

The server room is tight. 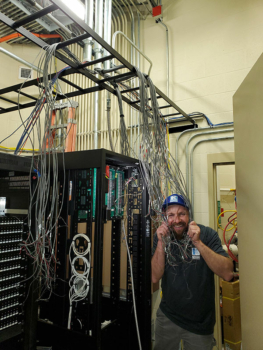 With two equipment racks and cabinets on the wall, there wasn’t much room for testing and repairing any failed equipment. Every wire was in conduit extending down to the racks and cabinets, adding further difficulty to any troubleshooting. Replacing the intercoms was also our opportunity to re-organize the server room, consolidate equipment and remove one of the racks.

Because of the importance of the intercom system, it could not be offline while we weren’t physically there working on it. The idea was to organize and label the wires, then take the system, disconnect the wires, take out the rack, install the new rack, and re-connect the wires in one day. Then with the intercom operational again, we could clean up the other items around the server room and remove the empty rack.

This story is not about how things went perfectly. You know how people say “Man Plans, and God Laughs.”; This was one of those days. Today’s story is about how the KB team relied on knowledge, experience, and determination to overcome some difficult situations and meet our customer’s needs. #goteam

When we arrived, there was trouble with a shower valve. 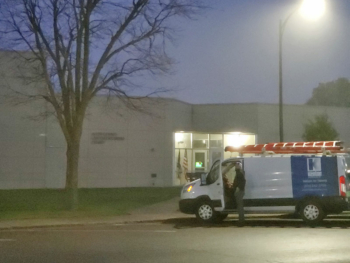 This cost us a couple of hours right off the bat. It was important to the customer, so we switched priorities to take care of them. Charlie, one of our project team members, got called away on a personal matter. Family comes first, so Jeremy and I wished him safe travels and hoped everything would be OK. (Thankfully, they are.)

Jeremy and I got started. It’s easy to say during project planning that we would just disconnect and reconnect the wires, but I think we underestimated what disconnecting and reconnecting 400 wires would actually take. Especially when everything was in conduit. After getting started at about 10 am we executed the plan. We stuck it out until about 7:30 pm when we finished connecting the last wire. With the new rack and new system in place, we were ready to start testing.

Wouldn’t it be great if everything was turned on and worked perfectly?

That just wasn’t the case. After about an hour of troubleshooting, we had to make a call. We couldn’t leave without a working intercom system, so we decided to put the old system back into play. A large portion of the project had been completed with the cabling and rack work. And we knew it would be a good idea to get to a stopping point and regroup. All the wires could stay in the rack, so we re-racked the old equipment and re-connected the intercoms and made sure everything was working. With the system back up and operational, we called it a day at 9:45 pm.

With the new rack in place, we decided to continue the server room clean-up while troubleshooting the new intercom system. Charlie was back in action. He and Jeremy continued working on the server room while I took the intercom back to the workbench at Kenton Brothers. After stepping through each component of the intercom system, we found the culprit. (It seems like it’s always the $10 part that fails.) After replacing the faulty part, Charlie was able to make a return trip to the Allen County Sheriff’s Office to reconnect the new intercoms and leave a more organized server room.

The difference is drastic as you can see in the before (left) and after (right) pictures. 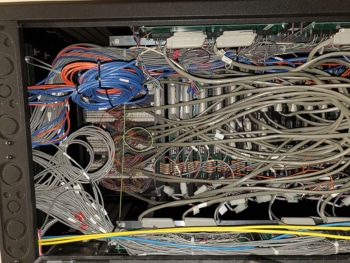 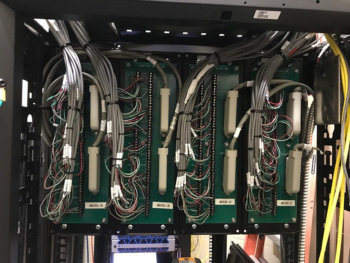 Allen County Sheriff’s Office has a new intercom system that will serve them well for many years. And they have a server room with more space and much better organization. This will allow future equipment additions and troubleshooting to be done efficiently.

We are proud to be partnered with the Allen County Sheriff’s Office for their commercial security needs. This was a challenging and rewarding project!

CyPhy Part 4 – Testing Your Knowledge about the Convergence of Cyber and...

Three Security Trends for 2022 – Blurring of Cyber and Physical Secur...
Scroll to top