One chilly, rainy morning I was walking through our beautiful new KB Truman facilities to take out a bag of trash. I made my way to our dock, opened the door to toss the bag in the dumpster and what to my wondering eyes did appear? Our dumpster was gone and our recycling dumpster was knocked over with recyclables scattered amiss….

My first thought… Why in the world would someone steel a trash dumpster? My second thought… Surely no one would take a trash dumpster. Maybe our waste services company took it for some reason. I decided to call them and check this theory out. Well, it was a poor theory. They didn’t come and take it, so who took our dumpster! It was the mystery to be solved.

Thank goodness we’re a top notch security company with only the best security cameras placed strategically “EVERYWHERE” I knew I would have my answer soon. Several people on our staff huddled around a monitor to watch surveillance videos. What we saw was magical.

Due to an unusually high amount of precipitation, the drains behind our facility had backed up. This created a three foot deep lake behind our building. Our two dumpsters performed the most glorious synchronized dance I’ve ever witnessed. It was like a real life version of Fantasia. We were mesmerized and just couldn’t look away.

The answer to where our dumpster went? It was behind the building the entire time… just a little further back than usual. The KB Missing Dumpster mystery has been solved. Please enjoy the amazing “Dance of the Dumpsters”.

Here at Kenton Brothers, our coworkers are more than just people we work with. 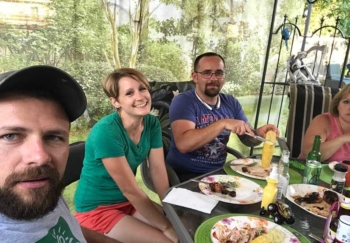 A few months ago, we sent Jeremy Shinneman, one of our technicians, to Colorado for a job. It just so happened that at the same time another technician, Chris Skinner, was in Colorado visiting family. Chris’s family was having a BBQ, and invited Jeremy to join them. Here’s what Jeremy wrote about his experience:

“When you’re sent out of town states away for work, and a fellow co-worker just so happens to be on vacation seeing the in-laws, you go on ahead and invite yourself over to the BBQ! Shake the man of the house’s hand, hug mom, and don’t leave any left overs! Thanks for letting me crash the party brother!!”

This pretty much sums it up that at Kenton Brothers, we value our culture above all else. We spend as much time with each other as we do our own families so we truly work to build and maintain those internal team relationships. We’re not your traditional corporate business… we take the time to get to know each other’s families, hobbies, and share in the ups and downs as a team. We believe this makes us a stronger team! 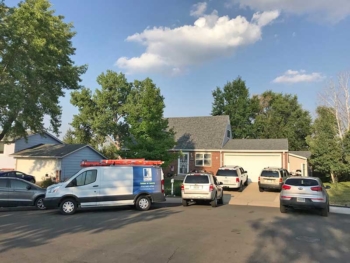 Kenton Brothers is in the final stages of renovating our new facility in the Truman Corridor. One of the reasons we chose this particular building is that it’s ten times larger than our old facility and better to showcase our cutting-edge security technologies. Ironically, our surveillance camera installation team had not yet gotten around to installing cameras on our building’s exterior. We were the cobbler whose children have no shoes.

Instead, we were focusing on the landscape, which takes a lot of hard work. The grounds were cleaned up and leveled. There was weed mat rolled out. Big holes were dug in which to plant various bushes, shrubs and trees. Finally, we were ready for the finishing touch – decorative rock, which was scheduled for delivery the next day. 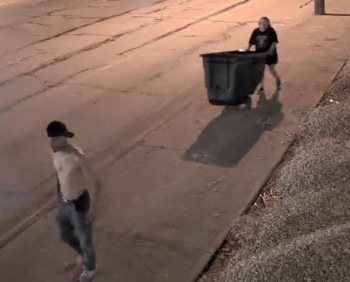 One of our new boxwood shrubs had been yanked right out of its lovingly and painstakingly-dug hole!

There’s an old saying that goes something along the lines of, “There are two types of people in this world. Those who own security cameras and systems and those who’ve never been burglarized.” The Boxwood Bandits shook us out of our renovation mindset and got our surveillance team in gear. What if these green-thumbed thieves returned to help themselves to more of our shrubs?

Our security installation team worked well into the night to install commercial surveillance cameras on our building to watch over the plants (and the rest of the grounds).

Early the next morning, (2:24 a.m.) a couple walked up to our building with a construction cart and began digging up and carting away our new shrubs. How do we know? We watched the video footage. The shrubs couldn’t be far away, so a few of our employees canvassed the neighborhood and located our missing boxwoods.

Kansas City Police Department officers also watched the video on one of employee’s phones, and we showed them the house where our kidnapped shrubs were being held. Police questioned a woman who came out of the house wearing the exact same shirt she was wearing in the surveillance video. She said, “That’s not me.” Police asked, “Would you like to press charges?” We said, “Yes. Yes we would.”

Thanks to commercial-grade surveillance, these Boxwood Bandits were busted. With the Kansas City Police Department’s help, we were able to retrieve our shrubs and re-plant them. 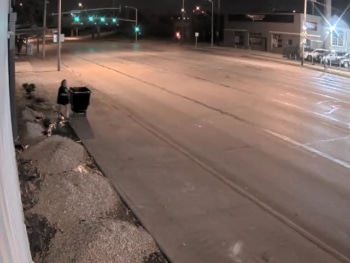 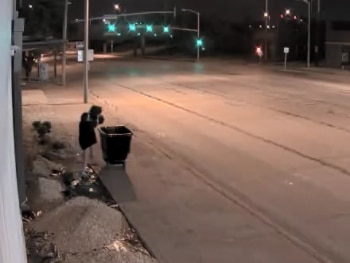 There are approximately 54 million 18 to 34 year olds in the job market today. This group of individuals is classified as Millennials. 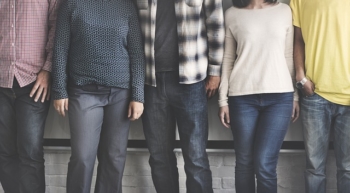 It seems society has put a lot of emphasis and thought into what makes a millennial “tick” from an employment perspective. This group of individuals has a higher digital connection than previous generations and is usually tied to social media outlets. Many Millennials like flexible schedules, working from home and lots of time off.

Simon Sinek explains in this YouTube video the difficult situation Millennials find themselves in. His theory is based on how they were raised and what they were taught in school and sports. And now they’re trying to get a job, or keep a job, and struggling. The video has over 9 million views and makes some very good points. If you have 15 minutes, we encourage you to watch it… it might help you support Millennials on your team more effectively with a better perspective.

Companies Have to Do Things Differently

Companies are finding they need to change strategies, policies and procedures to adapt to the desires of Millennials so they can keep their work forces intact and growing. Having a meaningful job and feeling they’re contributing is just as important to many Millennials as their compensation. Accepting that Millennials like constant change and aren’t looking for a lifetime career is something employers are learning to adapt to as well.

Millennials like direct, immediate feedback, not traditional performance reviews, and they thrive on personal development and clear cut paths to climbing the ladder.

How Are We Supporting the Millennials at Kenton Brothers?

Kenton Brothers has taken great steps to create personalized career paths within our organization to show every employee how they can become the CEO some day if they so aspire. We’ve created quarterly team building events, staff breakfasts, potlucks and more to promote engagement and stronger team values. Our culture is like a family where we support, guide and provide assistance on both a business and personal level, and we’re embracing continual recruitment in our organization.

Kenton Brothers has found that with all changes we’ve implemented, we’re hiring and building relationships with many Millennials that are doing great things in our business every day! 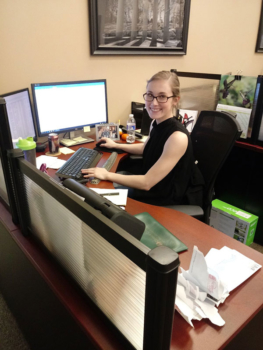 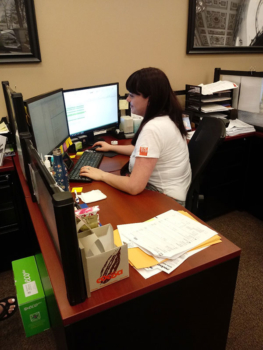 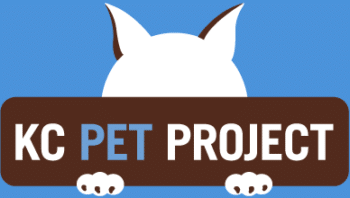 This holiday season, Kenton Brothers will be partnering with KC Pet Project to bring some much need support to homeless pets. This is a “no kill” shelter that provides medicine, veterinary care, vaccines, food and other resources to save animals that would otherwise have no hope.

Kenton Brothers is a pet friendly work place. We’ve seen the benefits time and time again of having a furry friend around to lift the spirits of our team. We believe it’s important to give back to those in need. And it doesn’t have to be just humans! What a great way to support our four legged friends by helping KC Pet Project.

Here are a few of the benefits of having a pet:

We encourage you to check out the KC Pet Project Wish List this holiday season. It’s a great opportunity to make a donation. Even better, maybe you have room in your family to bring one of these dear animals home! 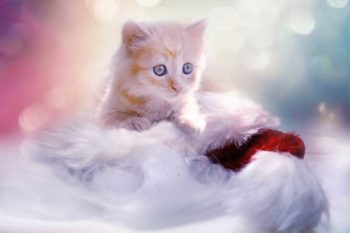 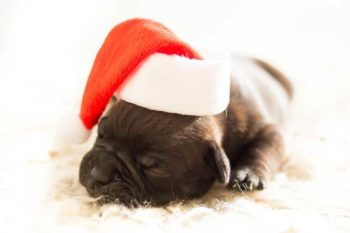